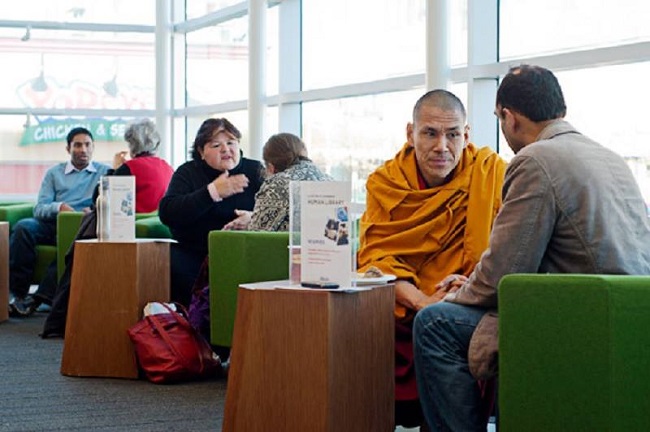 They are called "human libraries".

In my village, that was always called "to sit down and talk to someone".

It is very sad to see how some basic human values ―human interaction, conversation, exchange of knowledge and affection, closeness, solidarity, understanding― are disappearing in an increasingly impoverished and weakened society.

But it is even worst to see how, instead of pointing out these issues and doing something to solve them (and, at the same time, criticizing the causes that brought us to this unfortunate state of things), we produce proposals and ideas that are anything but sad and poor "patches" to the problem. And on top of that, these ideas become a fashion, a trending topic, a series of hashtags ― they present themselves as very advanced and revolutionary novelties.

And some libraries, of course, hurry to embrace such "novelties"... especially because of their eternal fear of falling behind in something (another plague of our modern times).

No, they are not "human libraries". It's called "sit and chat". And it is notthing new: I do not know in yours, but in my town, we invented this stuff centuries ago. And without any need for hashtags.

[And if in your library you want to do something about it, dear colleague, start by chatting with your users as they approach the counter, and stop treating them as objects. Trust me: it is an excellent habit (you may even like it!) And it sets a very good example].