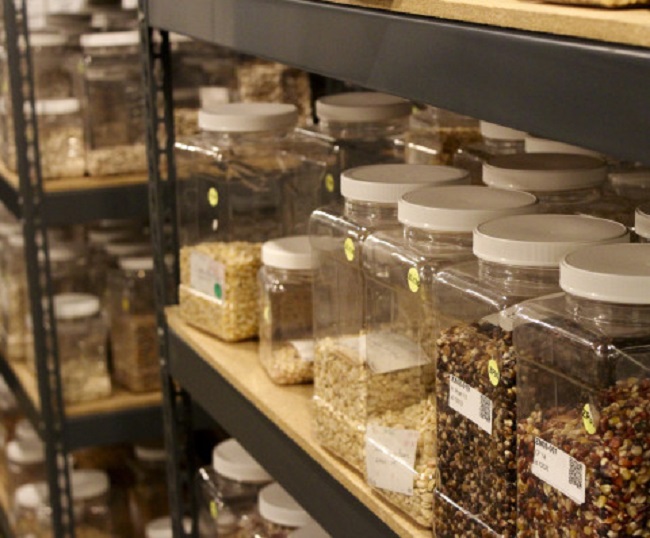 In his A New Green History of the World (New York: Penguin Books, 2007), Clive Pointing writes:

"Despite the large increases in production during the twentieth century there were signs of increasing fragility in the world's agricultural system by the end of the century. Most of the increase in production had been achieved through a massive increase in inputs. ... Production also depends on a very limited number of crops and varieties. During the twentieth century about three-quarters of the world's crop plants were lost and no longer cultivated. Ninety per cent of the world's calories now come from just twenty species and half the world's food intake comes from just four —rice, maize, wheat and potatoes. Of these four, 60 per cent of the output comes from specialized high-yield varieties. This makes the world potentially very vulnerable to any disease that affected one of these varieties" (p. 245).

The "seed banks" appeared towards the end of the 1980s precisely as a response to that loss of species. They are true vegetable repositories, storing those native plants used in traditional agriculture that have been displaced by dominant crops, and practically forgotten.

Personally, I prefer to speak of "seed libraries" rather than "banks", because of the different (and almost opposite) connotations that both terms have. The first implies an understanding of the nature of what is stored, for its proper classification and organization. But also a spirit of conservation of the memory, which in this context can be understood not only as genetic memory or biological memory —the DNA of the plants that have fed us humans through generations— but also as good agro-ecological practices involved in human experience since Humankind began sowing and harvesting.

Going one step further, understanding a seed store as a library allows us to treat the genetic and ethnobotanical information associated with each species as one more piece of the enormous fabric of human knowledge and, therefore, to link it with many other pieces of information (anthropological, social, ethnic, linguistic...).

It is obvious that the relationship between the library (understood as a space for safeguarding, organization and dissemination of any type of information) and the disciplines and movements that deal with the biosphere can be much closer than it has been until now. In this column I will explore some of those possibilities.

Note belonging to the series Knowledge and biosphere.