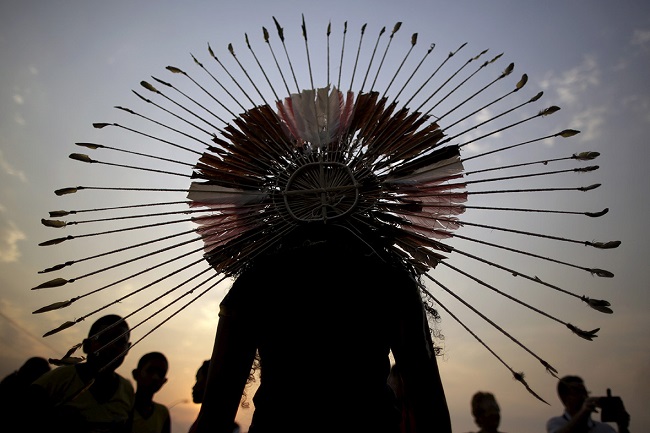 Am I indigenous? Am I not?

[Or: Whom I'm working with when I work with indigenous societies?]

[For a number of years now, the author has been working with indigenous and minority societies from one and the other side of the Atlantic Ocean, respectively, primarily in libraries development in native communities in South America].

My ancestors were Piedmontese, Sicilian and other southern European peasants who, out of necessity, migrated to Argentina at the end of the 19th century.

According to some international definitions of "indigenous" (and there are a number of them out there), I'm of indigenous descent. For my forefathers where part of communities that recognized themselves as "peoples" for centuries (and even had their own independent territories); spoke their own languages (today superseded by "official" languages, labeled as "dialects" or "minority languages", and endangered); and had their own identity, traditions and culture — part of which I inherited, because they were orally transmitted from generation to generation.

So... am I actually of indigenous ancestry? Not sure. They call my ancestors' peoples "national, cultural, or ethno-linguistic groups", even "nationalities" or "minorities" (labels in this world of ours are never enough). But they never call them "European indigenous societies".

Why? Probably because people speaking about "indigenous peoples" who reflect today's hegemonic Euro-American worldview in their approaches, usually refer —and perhaps they are not totally aware of it— to people who lived in a place in/from the beginning, before their territory was occupied and dominated by someone else. In doing so, they are talking about the survivors of the conquests and occupations carried out by all kind of imperial/colonial powers (and their heirs) somewhere in the past, but especially over the last five centuries.

And European peoples (national groups, minorities, or whatever they are called today) were not subjected to any conquest or occupation by imperial powers — or, at least, that's the common belief. Ergo, they cannot be seen as "indigenous".

But the common belief is wrong, and I could still consider myself as being of indigenous origin. The reason? During the last five centuries, and before going elsewhere to plunder and massacre, the imperial powers (most of them European) accomplished a sort of "internal conquest": a bloodshed aimed at eliminating dissonant voices, homogenizing the population and making everything even and the same in their own territories — everybody speaking the same language, believing in the same religion, loving the same flag...

Yes: before going to conquer other lands and peoples outside of their borders, the big Empires got some training at home. With their own peoples. That conquest somehow continues today, using all means at their disposal: from discrimination to negation, to oblivion, to cultural and social pressure, and from fines to criminal prosecution, to imprisonment, to state terrorism... That's why the language of my forefathers is now a dying "dialect" and their identity, a cloudy memory; that's why the surviving traditional beliefs, customs and words of modern Basque, Galician, Asturian, Occitan or Welsh peoples, to put a few examples at hand, are literally collapsing under the weight of "national" elements.

And yet, nobody would say that I'm "of indigenous descent".

Again: why? Maybe because, for a number of reasons, when people speak about "indigenous peoples" nowadays, they are in fact referring to non-European peoples that have been (and still are) the victims of the European colonial, imperialistic powers (and their heirs) since 1492 onwards.

Going one step beyond, most of them don't speak about any non-European people: they have a very particular profile in mind. In order to be truly "indigenous", these peoples have to be Others. They have to be different from "us": different language, different skin, different thoughts. And, in general, they have to stick to a sort of stereotype that includes a number of commonplaces: connection to Nature, spirituality, sacred traditions, "folkloric" clothing, music and habits... In certain contexts, these differences may be used for discriminatory, even racist purposes; in others, for (intentional or not) romanticist deformation of the true nature of modern "indigenous" and "minority" societies.

In that case, no, I'm not of indigenous background. For some people, I'm even a member of the conquerors' lineage.

So... what makes an indigenous person to be indigenous? What makes me not to be one? In what sense are we using the term "indigenous" today? Are we using it just as a polite umbrella-term — a politically correct word to mean "the Others", "the exotic, different ones over there"? Or "the non-western-European survivors of an imperialistic madness which is still going on today under other names but with the same purpose, and about which nobody cares that much after all"?

I have no proper answer to any of those questions, and I don't know if anybody has.

Definitions and concepts related to this subject are too many and too divergent nowadays. Probably because it's a thorny issue; there's still a lot of pain floating around it, too many heated and opposing opinions, too many contradictions. And too much damage done and being done. I know that firsthand: when I work with the so-called "indigenous" peoples in South America and the so-called "minority" peoples in Europe, I find similar traces of violence buried in their history and their memories, and I recognize very much the same cultural pressure and social negation in the present. Even if the scales are radically different —I don't know if there's something even comparable to the genocide suffered by indigenous peoples in the Americas—, all of them are survivors of a tragic past that never really went away and continues to shape their present.

After visiting and discussing all these ideas for many years, once and again, I've found that it doesn't really matter whether or not I am of indigenous descent. Many words and labels have changed or lost their original meaning and have become quite useless. At this point, knowing who my forefathers were is enough for me, as well as being aware of their legacy, including some pieces of their "minority" languages and their love for a small patch of land that, even in the distance, they never forgot. Knowing my heritage as an Argentinean citizen is also important: it feels overwhelming being heir to so many native languages, customs, beliefs, (bright and dark) stories sounds and ideas, including —again— the love for a particular home ground and many different landscapes.

I try neither label people nor myself: an "indigenous" person, for me, is just a person — no need of adjectives. It's a person with a past and a history, as many others. A person with a language and a culture, as I am. A good, bad, boring, interesting, dumb or intelligent person, as all the rest populating this planet. A person that deserves all my respect, as everyone else. Probably a person that has been a victim of injustices and cruelties, and who deserves (and will have) my absolute support, as all the many others suffering right now, from refugees to victims of discrimination. Probably a person from whom I can learn a lot of things. Like millions of other persons, no matter their origin.

For me, right now, "indigenous" and "minority" peoples are symbols. Do not understand me wrongly: they are symbols of the diversity of this world, and of resistance against hatred, discrimination, homogenization, negation and oblivion. I believe that this diversity and this resistance are good causes to stand for, to work with, and to struggle for. Because they are desirable values for a world that insists on blinding itself to difference — a world on its way to being reshaped through a screen, with no roots, anchors, references or horizons whatsoever.